Picking Up the Pieces After the Armistice: Prosthetics and Poverty

(historian in residence at the Westfield War Memorial Village Lancaster)

The picture is of the Lancashire man Herbert Billington in the post-war years. Look closer at him and you may notice anomalies – for Herbert had been all but shorn in half by a German shell during an enemy attack. Left for dead by his comrades he was picked up by the advancing Germans and passed back into their medical system, where surgeons fought to save his life. By the time he left the 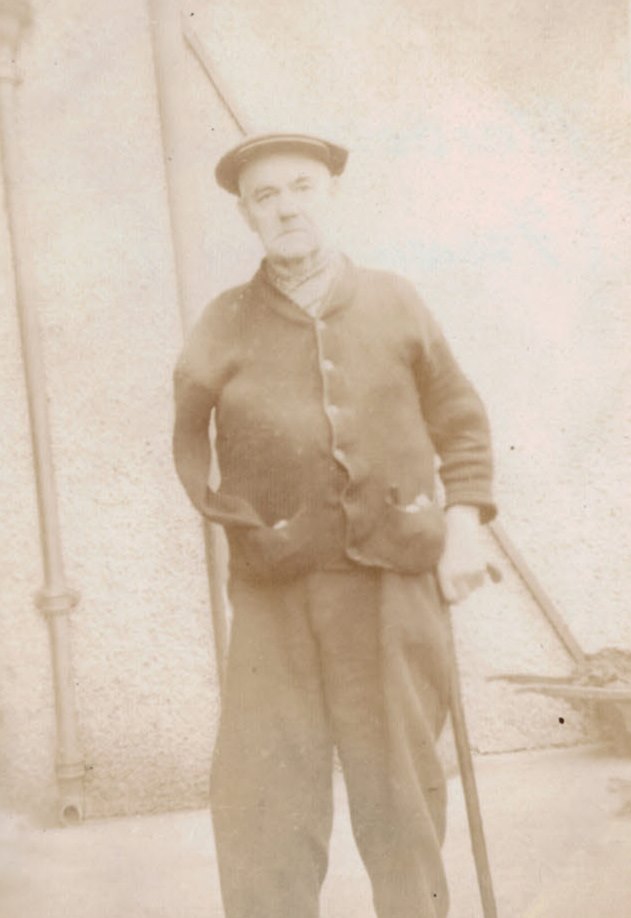 operating table Herbert had lost his right arm, right buttock and right leg and could be safely repatriated as someone clearly incapable of taking further part in the war effort. Men like Herbert, suffering from severe war disabilities, often faced destitution back in civilian life and (with Government pensions far from satisfactory) found themselves at the mercy of charity. They were also left with conflicting emotions – Herbert, for example, would never hear a bad word said about a German, as while they had inflicted his injuries, they had also saved his life when his comrades had given up on him. In this illustrated talk, Dr Martin Purdy (an internationally recognised expert in disability and warfare and the role of philanthropy and charity in the care of such veterans of war and their families) talks us through the challenges that injured veterans faced in the post-war years and how philanthropy and charity not only saved so many of them but also went on to reshape modern attitudes to care and rehabilitation.

The Branch welcomed back Professor John Bourne and as usual he provided an insight into the actual circumstances of his topic, not that of popular belief.

The first trawl for 100,000 volunteers in 1914, which would be known as K1, in popular culture comprised old dug out officers, clerks and tradesmen. This was not the case.

When war broke out, Kitchener was certain the war would not be a short one and had to persuade the government that civilians would be required to boost the small regular army. He was not impressed by the Territorial Force, who he regarded as playing at soldiers and were not obliged to serve overseas but to be ready if Britain was invaded.

Kitchener used the regular Army structure and aimed to recruit a battalion into each of the existing County Regiments except for the Guards, London and Aldershot. However, the system struggled early on. In Birmingham the local newspaper had to print the necessary forms for recruitment. Six regiments and the Irish did not have a TA. The aim was to eventually create 80 K1 battalions. It was a big task to fill these first battalions with men and officers. Contrary to common folklore the majority of officers were not ‘dug outs’ but regulars. 82% of K1 battalions were led by active officers. There were 54 regular majors.

7th North Staffordshire Battalion formed in 1914 took part in Gallipoli Campaign July 1915 – January 1916. They were evacuated to Egypt. They served in Mesopotamia from February 1916. From July 1918 were part of North Persia Force and ended the war in Baku, Azerbaijan. The Commander of 5th Northants served for the entirety of the war.

Many of the men were not young boys. Officers were usually aged 25-32 and many had career training at OTC. They were accustomed to running things and could make decisions on the spot. Officers were relatively young. Majors averaged 44.

The men were mainly working class and not weedy, as is often portrayed. Their height averaged 5’9”. However their average weight was 9-10stones. (Nowadays 13 stones). They were wiry and working in heavy industry would sweat off any fat. They were strong and resilient. They were not as localised as the later Pals battalions who often shared the same workplace or society. Nevertheless, they would have a local affinity to their unit.

They had joined to fight Germany which had invaded neutral Luxemburg and Belgium. However, although the Australians and regular units formed the main presence, 3 New Army divisions saw action in Gallipoli in 1915, losing 5 battalion commanders. The K1 men did not feel any requirement to take on the Ottomans but should have been taking on the real enemy, Germany. Like many other Great War misconceptions, although the Australians and New Zealanders fought with great courage, they were outnumbered by the French units.

Our thanks to John for a meticulous and well researched talk, dispelling more of the misconceptions of what actually happened in the Great War. Terry Jackson

Review of Journey’s End performed in Ypres on 10 November

The city of Ypres in many ways epitomises our century held view of events surrounding the Great War. Appropriately, the Het Kruitmagazijn, a restored gunpowder store within the shadow of Ypres’s Ramparts was the venue for an excellent interpretation of C.F Sherriff’s Journeys End, which we saw on 10th November 2018. The play provided two themes: the first the merits of an exceptionally acted and crafted theatrical story and the other its historical representation of events around the German Offensive of 21st March 1918, particularly relevant to WFA members. 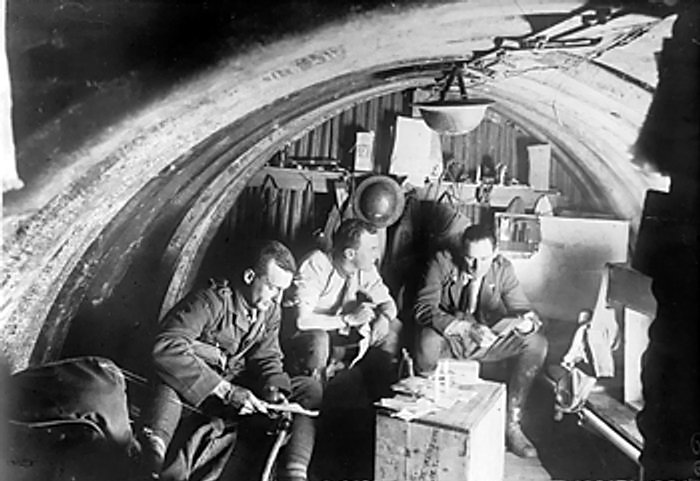 The play is set in an officers’ dugout in the forward trenches, and commences as the new unit takes a hand-over. The departing officer is keen to go, not surprisingly as there is a strong rumour of a “German push” Captain Stanhope is the Company Commander about to take over. He is now a professional soldier hardened by four years of fighting. His professionalism comes at an exacting cost. He cannot see any other life other than the present, no future only war. He has experienced the reality of life being cut short by bad luck, bad decisions but invariably by powerlessness. He compensates by trying to forget and takes solace in whisky.

Unfortunately for Stanhope all his anxieties and fears are laid bare, with the arrival of Lieutenant Raleigh, a living ghost of his former self. Young, straight from public school, idealistic and naïve about the totality of war. He is also the brother of Stanhope’s girlfriend. The play centres on this juxtaposition of their relationship and Stanhope’s attempts to limit his interactions with Raleigh, as to safeguard him and to allow the later to be inducted into war. The other cast members open out and develop the story. Lieutenant Osborne, the older officer, referred to as “uncle” shows the compassionate, caring and insightful characteristics; whose quiet patriotism, stoicism have been rendered superlative by 1918. Events, inevitably overtake everyone which renders their personal predicaments as meaningless. A trench raid followed by the German attack ensure Journeys End will result in death, injury or captivity for all these participants.

The MESH theatres production was excellent. The venue memorable, enhancing the dramatic action. The small stage set emphasised the claustrophobia of the soldiers’ ordeal. An enjoyable evening prior to the Centenary the following day.

The WFA has established a weekly audio podcast called Mentioned in Dispatches, hosted and edited by the author.

A broad range of subjects are covered and we have examined the Battle of Arras, women in the Great War and the key individuals such as Brigadier General Frank Crozier.

The programme has two formats, either interviews with guests, such as authors, academics or historians, or lectures given at WFA conferences or branch meetings.

There have been 40 episodes recorded to date (at time or writing) and have featured well known experts such as Andy Robertshaw, Dr Nick Lloyd from King’s College London and Jack Sheldon.

For those unfamiliar with podcasts they are digital audio file made available on the internet for downloading to a computer, smart phone, tablet or mobile device, typically available as a series, new instalments of which can be received by subscribers automatically.

Podcasts are free to listen to and can be accessed by two methods:

1. Via your tablet or smart phone. You can listen via iTunes if you have an apple device or SoundCloud or Acast if you have an android device. Simply type in the name to the search box (magnifying glass icon) and subscribe.

2. Via your computer. Simply go to Acast.com and type in ‘Mentioned in Dispatches’ to the search box and all the recent episodes are there.

If you have any suggestions for topics to be covered or people to be interviewed, please contact This email address is being protected from spambots. You need JavaScript enabled to view it..

DESPATCH is the official journal of the Lancashire North Branch. The author, amateur Great War historian and noted speaker on the WFA circuit Terry Dean, has produced two editions each year since 2008. We can appreciate the overwhelming interest, time and effort, and travel, that has gone into this production, so much information on matters previously unpublished. If you are interested, past copies of Despatch are on the Lancashire North Branch website. www.wfanlancs.co.uk

Terry kindly allowed me to distribute his final edition (Issue 22 Nov 2018) to our members at the 9th November meeting. The WFA’s aim is to educate the public and Terry’s hard work in researching this time relevant document adds to this premise. I still have some spare copies available on request. Ralph.

Picking up the Pieces after the Armistice: Prosthetics and Poverty

Of no earthly use: The 2nd Line Territorial Force Divisions and the Western Front by William Mitchinson

The Aisne Again: May 1918 - The Essence of Blitzkrieg by David Blanchard